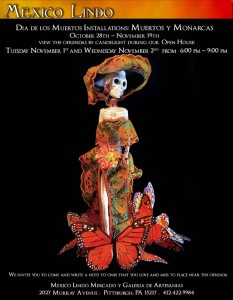 The Monarch butterflies return to Michoacan each year on the Days of the Dead, and many believe they are the souls of the dead returning for a brief visit…and so here at the store we build two large ofrendas, or offerings, to help light their way home, featuring the monarchs as well our astounding selection of artesanias dedicated to this holiday, from the silly to the sublime.

Available for viewing from October 28 ~ November 19, with a candlelight Open House on the Days of the Dead: November 1 and 2, from 6:00 ~ 9:00 pm. We’ll be serving Chocolate Oaxaqueño and refreshments, and participants can add notes to their loved ones on the ofrendas. This year there will QR codes accompanying many of the photographs so that participants who bring smart phones or tablets can access additional media resources with url links and video clips pertinent to those that we are honoring. They can join our wifi network if needed, and should make sure that they have downloaded the appropriate QR code reading app for either Apple, Android or Windows devices.

Report from the Road

Well, when we posted a few pix from the road on the store Facebook page while in Mexico at the end of August, with the promise of more soon to come, I didn’t think it would take me this long to get around to it, but between unpacking all of the new things, creating this word press blog (still getting the hang of it!) and making plans for Dia de los Muertos, here we are in October already!

We began in Taxco, where the towers of the Santa Prisca cathedral are always a breathtaking welcome, beckoning everyone toward the zocalo… 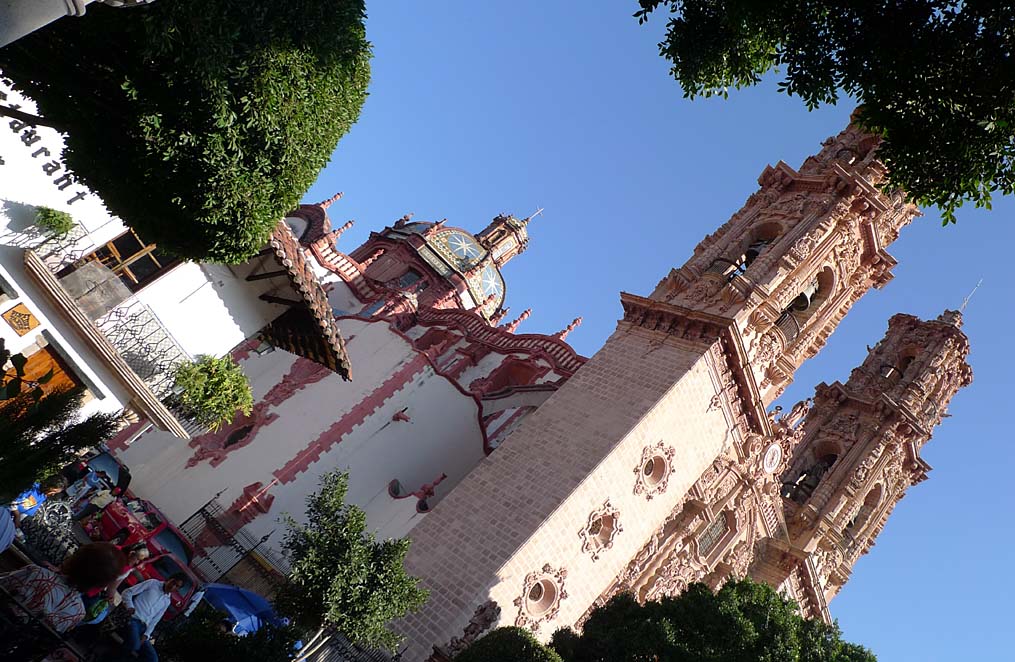 Of course we were there for silver, and even though the prices had increased considerably since our last visit, we managed to find lots of new styles without breaking the bank. One of the latest trends is the use of a matte textured finish: 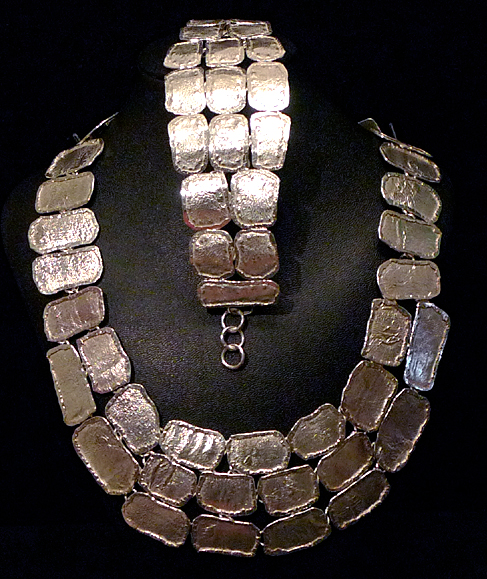 Little boxes and papel amate from Xalitla were also on the list, as always, and we were happy to find lots more of the little muerto cajitas: 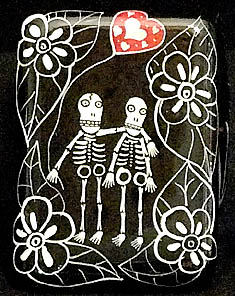 We skipped Metepec and Izucar this time around, being already well stocked in Trees of Life and muertos from there: 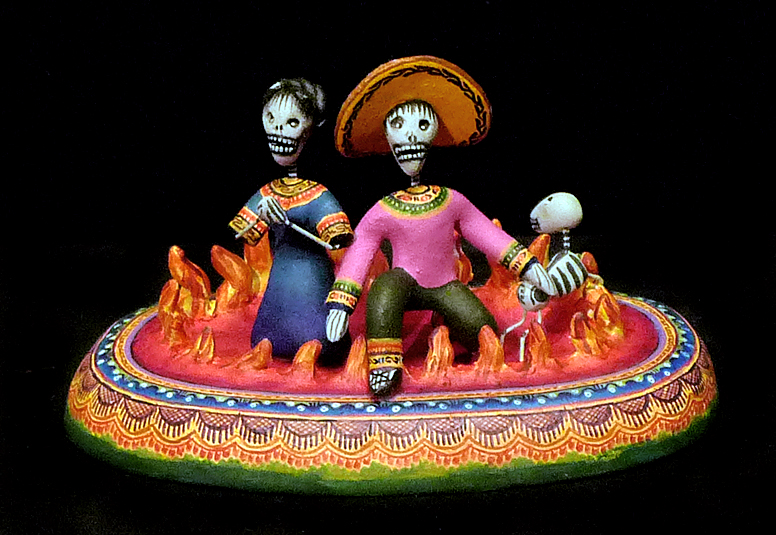 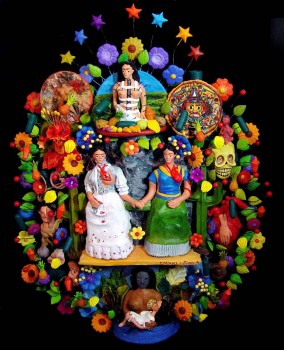 So on we ventured onward to Puebla, where the views of El Popo and Izta make the drive magical every time. 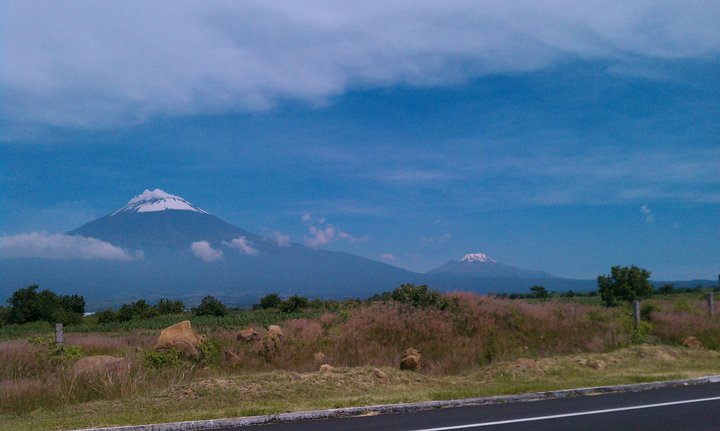 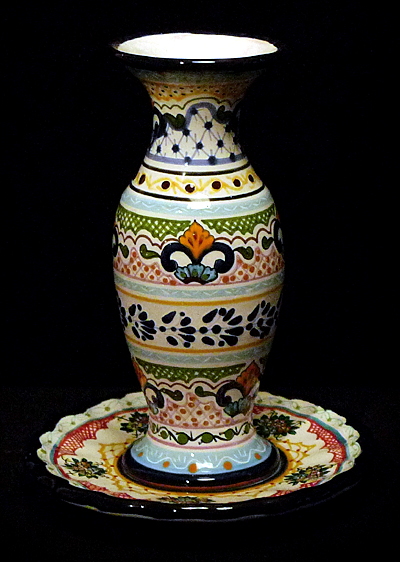 Better still than all of that was that it was a Sunday, when the streets around all sides of the zocalo are closed to traffic. Everyone is free to wander leisurely arm in arm, buying toys, candy, tacos, listening to music, watching entertainment and generally making merry in that beautiful tradition that I have only ever witnessed in the zocalos of Mexico.

We found it no less compelling once evening fell, when the lights of the great cathedral shine brightly for all to see, and Jean-Pierre found the balloon vendors still out in full force: 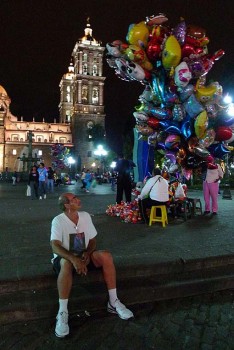 The next morning we departed for nearby Tlaxcala, where we soon found we would have to venture out to nearby villages in order to find some of the things that we were in search of. The little shops around the zocalo did hold some treasures as well, though, like my perennial favorite, tiny Fortune Telling Birds!

We were also delighted by a new recycled wrapper trend, little billfold wallets: 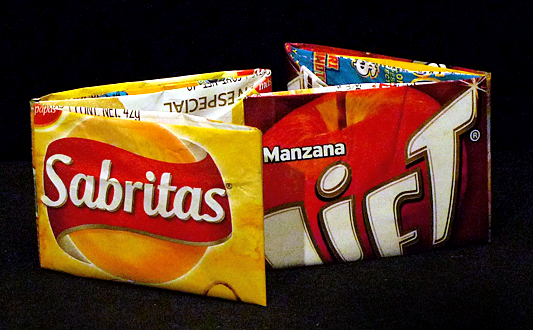 We went in search of Tlaxcalas’ famous canes in Tizatlan, and were amply rewarded: 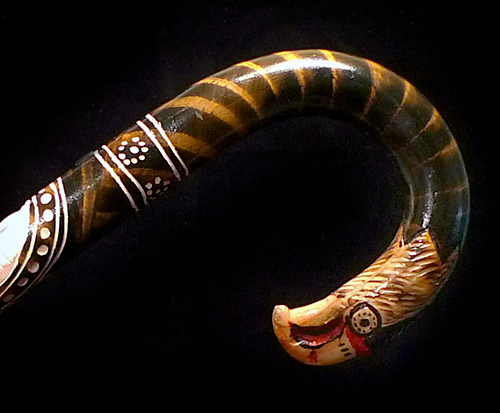 Also in Tizatlan is a very old church, convent and open chapel, built on top of sacred ruins, that are currently being excavated by the National Institute of Anthropology. And from this vantage point was a heavenly view of La Malinche: 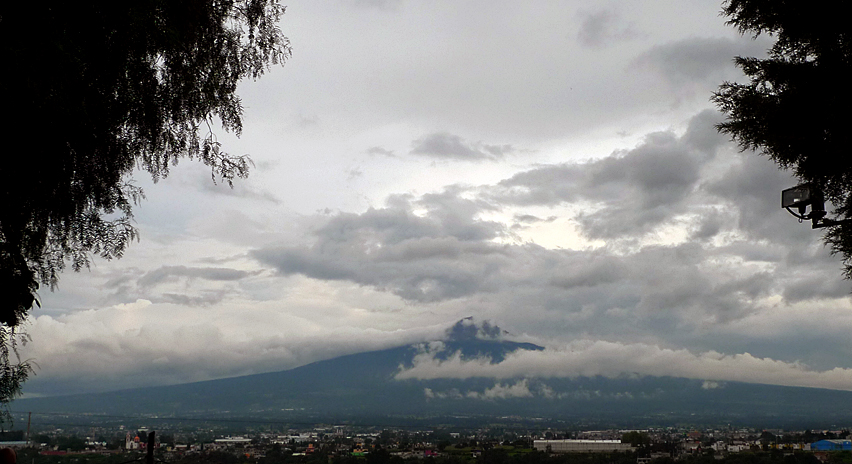 And next we sought out an artist known for his papier mache, Federico Diaz Flores of Popocatla, where we picked up some crazy alebrijes: 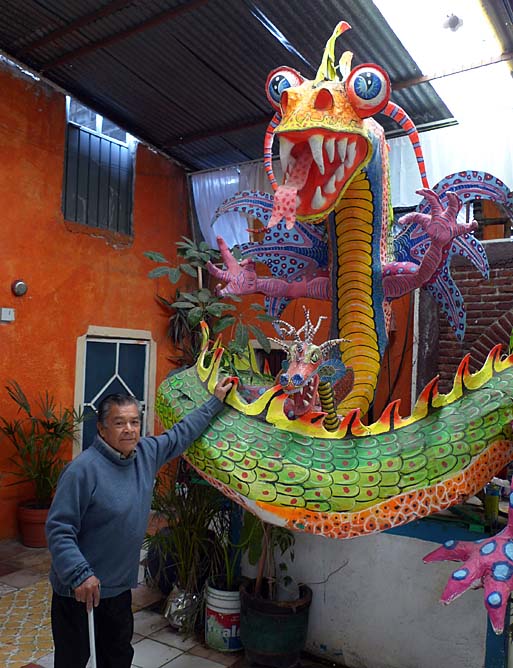 Back in the heart of Tlaxcala, on a picturesque hilltop is the Temple and Ex Convent of San Francisco, a tranquil and magical refuge where Jean-Pierre spent may summers of his youth playing amongst the stately trees and buildings… 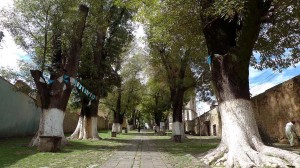 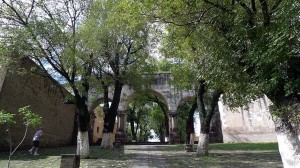 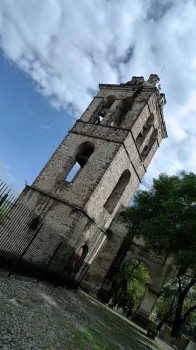 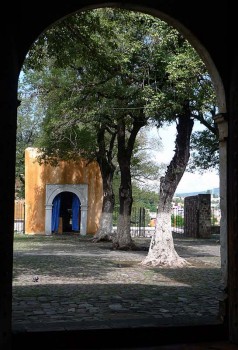 We returned to the zocalo once again to drink in the famous murals of the Government Palace, which had been closed for restoration when we had been there a few years previously. The artist, Desiderio Hernández Xochitiotzin, was a dear friend of Jean-Pierre’s family and one of the last great Mexican muralists. 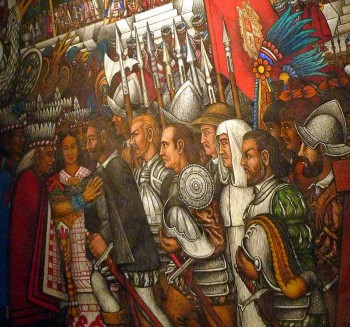 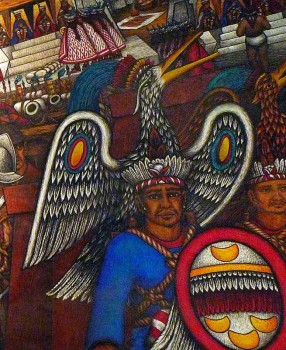 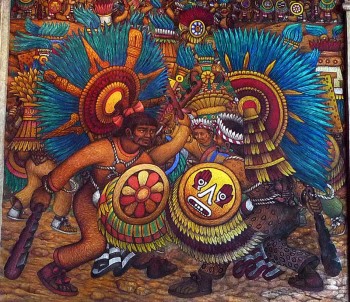 We longed to stay to see more archeological sites, but time wouldn’t allow, and so we returned to Mexico City the next day to finish up our shopping. The Alameda was bustling for a Thursday, and we enjoyed the sight of the mounted police keeping watch: 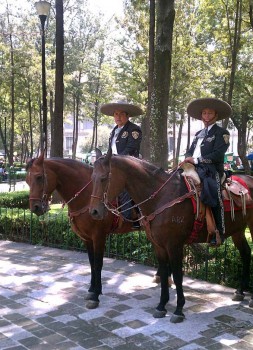 As always, we picked up a little bit of everything: toys, glassware, nichos, Talavera, Servin stoneware, winter clothing, t-shirts, soccer jerseys, various tin items, papel picado, purses, miniatures, nativities, amate, stuffed animals, mobiles, xalitla and other ceramics, textiles and new masks of all kinds, just to name a fraction of our finds. And when we returned home, a few new spectacular pieces from Jacobo and Maria awaited us: 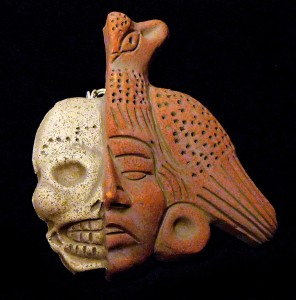 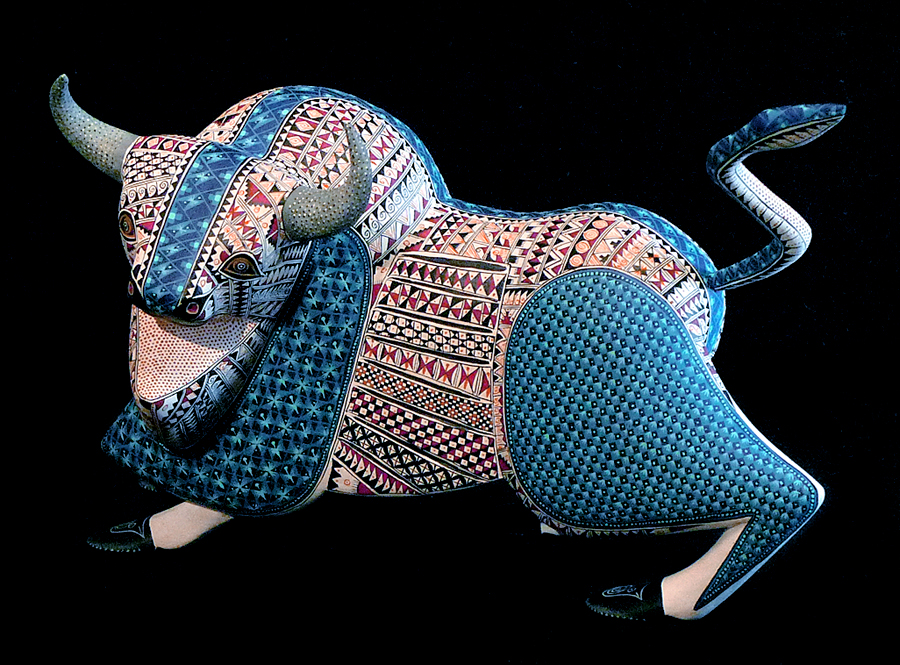 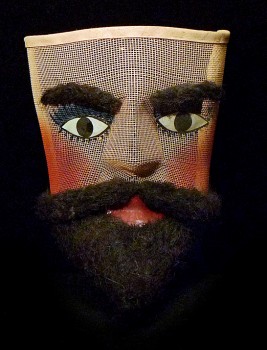 And so this seems as good a place as any to end this little travelogue and to tell you about this years’ Day of the Dead event, Muertos y Monarcas, which you can read about in the pdf file on the link. We’ll serve some refreshments and Oaxacan hot chocolate, burn the copal, add additional names to the ofrenda and light the candles on the Open House nights. It was another sad and difficult year with so many dead to remember, and once again we’ll be counting casualties from the wars in Iraq, Afghanistan and Mexico.

If you need items to decorate your own ofrendas, now is the time to come and get them; we have sugar skulls and just about everything you could imagine to suit your needs. Hope to see you soon!