Thirty visually impaired or blind people learn photography with the help of the Mexico City foundation Ojos Que Sienten, or Eyes That Feel.

A rabbit to remember 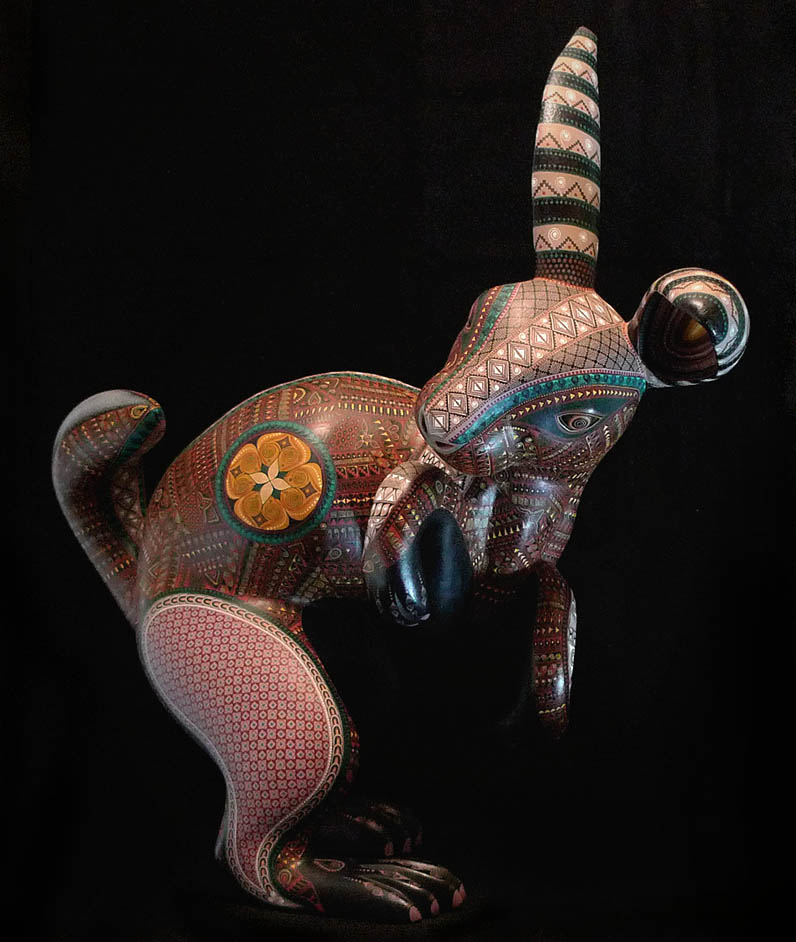 Museum quality giant rabbit by Jacobo and Maria, one we will remember long after it is gone…more pix to follow, a very difficult subject to photograph!

¿What’s in the Window? 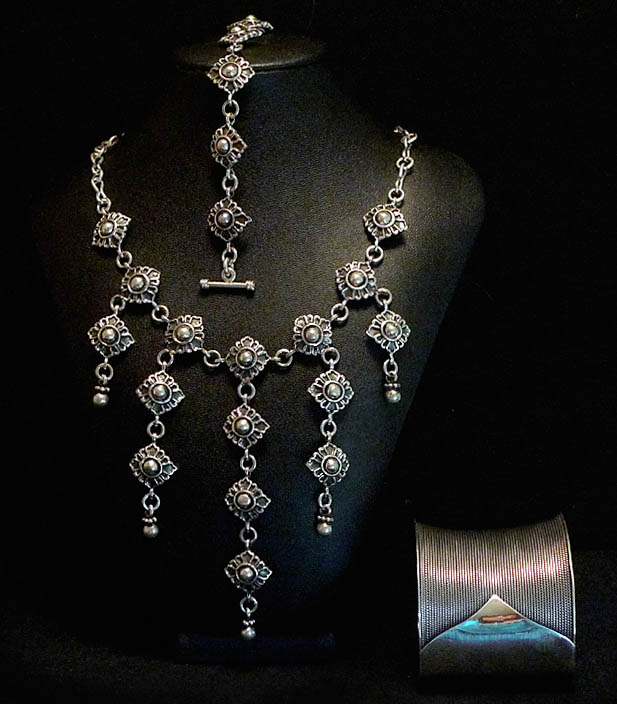 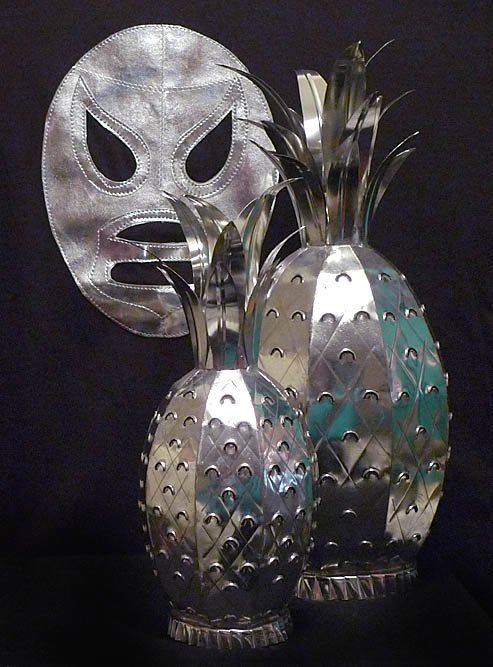 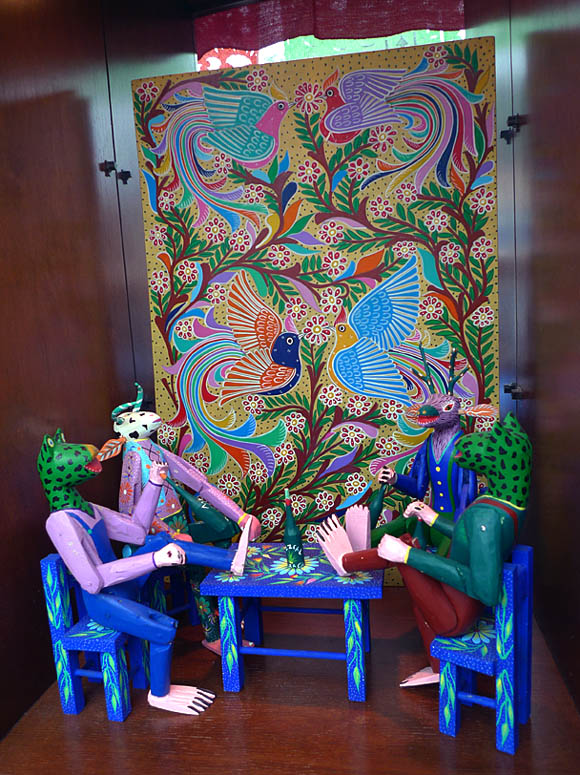 Painting in the style of papel amate by Lucas Lorenzo, $138, Mezcal drinkers, $155 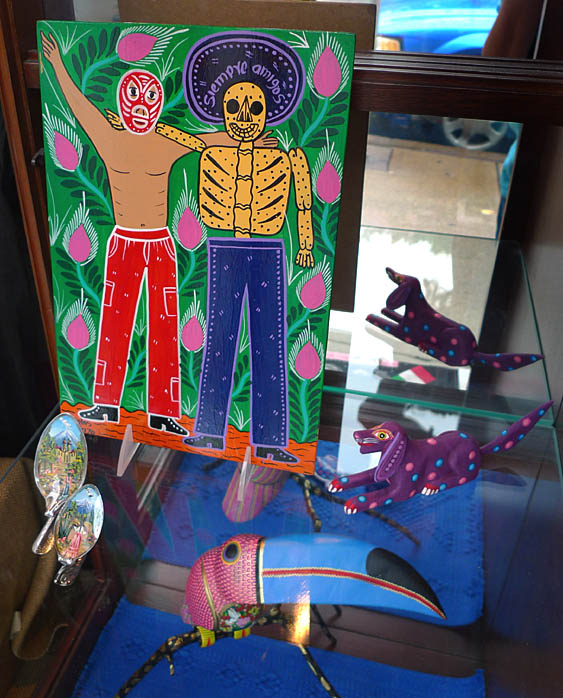 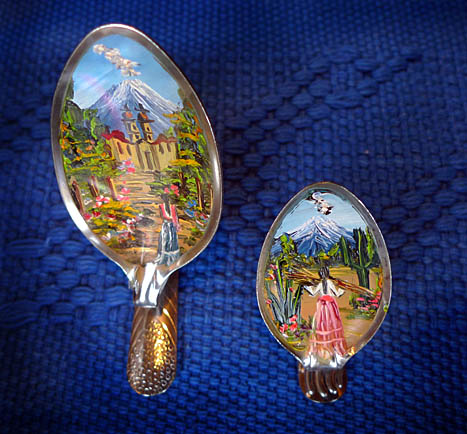 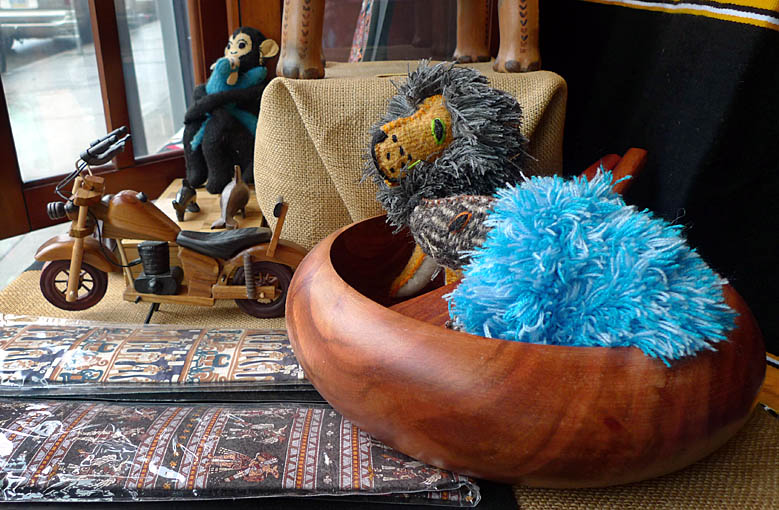 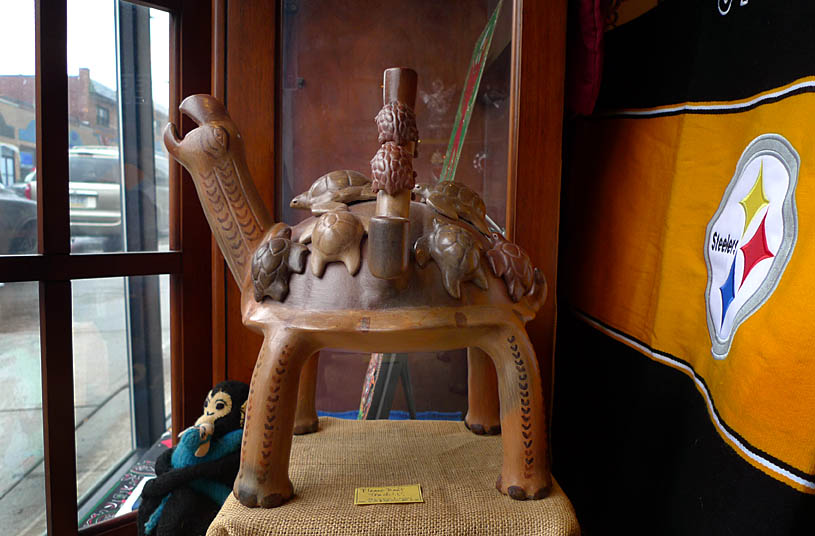 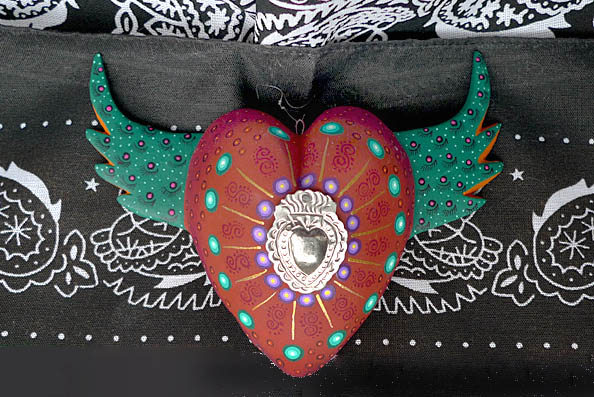 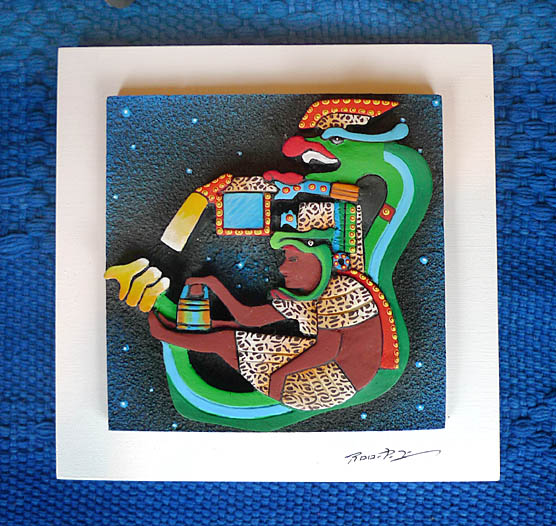 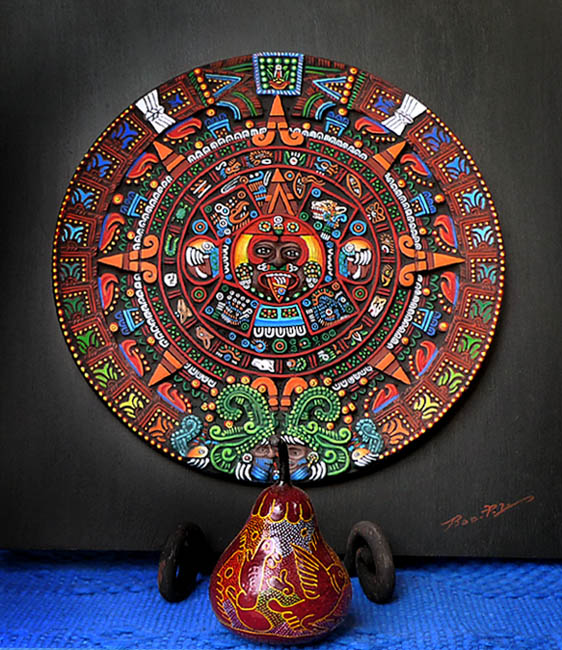 Mexican tycoon Carlos Slim, reputed to be the world’s richest man, has unveiled a new home in Mexico City for his art collection. The Soumaya Museum is named in memory of his late wife.

During the 1930s, two well-known Mexican painters, David Alfaro Siqueiros and Jose Clemente Orozco, created public murals in downtown L.A. and Pomona. Jesse Lerner, curator of “Mex-LA” at the Museum of Latin American Art in Long Beach, says the artists’ work had a ripple effect in the Southland.

Siqueiros hired influential artist Millard Sheets, who later created mosaics for Home Savings and other institutions. Orozco influenced Rico Lebrun, who later worked with Disney artists on the animated feature “Bambi.” “Mex-LA” explores the interactions and influence between artists from Mexico who came to L.A., and American and Mexican-American artists. Lerner says few people have documented the ways those creative people mixed it up. The story of architect Robert Stacy-Judd stands out, he says. Stacy-Judd relocated from England to L.A., where he indulged his fascination for all things related to the ancient Mayan culture.

“He was extremely engrossed. He visited Yucatan several times, he wrote a number of books about his travels there and about his theories about pre-Columbian contact between the Maya and Europe by way of the continent of Atlantis,” he said.

His Mayan-influenced hotel still stands in Monrovia. By most measures, Stacy-Judd was out there. There’s a picture in the exhibit of him dressed in a Mayan-Aztec headdress and tunic, posed as if he’s in the Bangles’ “Walk like an Egyptian” video.

“Here we have one in which Donald is trying to reach a guitar but the guitar, if you look at the guitar, the guitar has these kind of colorful abstract forms that might refer to a serape, but it also looks pretty modern, it looks modernistic, it looks abstract,” he said.

That’s the point of the exhibit — that the interaction between Mexican, American, and Mexican-American artists resulted in nuanced work light years from the sombreros and Mexican food that many people associate with our southern neighbor’s influence on L.A.

Ortiz Torres says several well-known Mexican intellectuals lived and worked in Southern California. He notes that the late Nobel Prize-winning writer Octavio Paz came up with the idea for his groundbreaking book “The Labyrinth of Solitude” when he lived in L.A. a second time. Paz lived in Los Angeles in his youth when his family was escaping the revolution and it has been said that this is the city where he learned how to read and how to write.

Ricardo Flores Magon, a Mexican anarchist writer who fanned the flames of the 1910 Mexican revolution, coined the slogan, “Tierra y Libertad” — “Land and Liberty” — when he lived in L.A.’s Echo Park. Ortiz Torres says these stories have as much to do with art in L.A. as those associated with artists like Ed Ruscha or John Baldessari.

“Dreams are an activity of memory, our unconscious draws from these memories to create these dreams, so I think for Los Angeles to construct its dreams, it has to be aware of its memories and its past and in this case it has to do a lot with Mexico,” he said.

The exhibit “Mex-LA” at the Museum of Latin American Art in Long Beach is part of the Pacific Standard Time series of exhibitions. The goal of that series — coordinated between multiple institutions — is to document and recover Southern California’s art history before it disappears.

Mexico: Peace Caravan “Has Made Us Feel Stronger”

Mexico: Peace Caravan “Has Made Us Feel Stronger”

Oaxaca, Mexico – (IPS) – With a huge hug, Olga Reyes from Chihuahua, who has lost six family members in Mexico’s wave of drug-related violence, greets Araceli Rodríguez from Mexico state, the mother of a young federal police officer who “disappeared” in Michoacán two years ago.

They are both travelling with the Peace Caravan, heading for Mexico’s southern border with Guatemala.

Reyes and Rodríguez then embraced Rosario Ocampo, the niece of Lucio Cabañas (1939-1974), a rural schoolteacher and leader of the insurgent Partido de los Pobres (Party of the Poor). Her family were displaced from their home and forced to flee from the southern state of Guerrero after the legendary guerrilla fighter’s widow was murdered two months ago.

“Thank you so much!” murmurs Ocampo, who joined the Peace Caravan just two days ago. Led by poet Javier Sicilia, the caravan is headed south to pick up supporters of the movement, which opposes the militarisation of the country in the fight against drug trafficking.

On the fourth day of the caravan’s progress, Sicilia was welcomed with flowers and incense by people from 16 indigenous communities at the ancient Zapotec ceremonial centre at Monte Albán in Oaxaca state.

“This caravan is strengthening awareness and strengthening hearts, and it is making people stand up tall,” said Carmelina Santiago, of the Flor y Canto Indigenous Rights Centre.

The procession of vehicles, which left Mexico City Friday Sept. 9, is going to Ciudad Hidalgo in the southern state of Chiapas, which borders Guatemala, to apologise on behalf of all Mexicans for the murders of Central American migrants.

Some 500,000 undocumented migrants from Central and South America cross Mexico every year in their attempt to reach the United States, according to estimates from academics and human rights groups. Along the way, they face the risk of arbitrary arrest, extortion, theft, assault, rape, kidnapping and murder, at the hands of youth gangs and organised crime, as well as corrupt police and other agents of the state.

The caravan will then travel through territory under the influence of the Zapatista National Liberation Army (EZLN), a barely-armed indigenous rebel group that laid down its weapons after just two weeks of skirmishes with the army in the first two weeks of 1994.

The participants will celebrate the anniversary of Mexico’s independence from Spain there on Sept. 16.

On the weekend of Sept. 10-11, the caravan drove through three towns in Guerrero, where more accounts were gathered about victims of the scathing violence that has devastated the country since President Felipe Calderón launched his crusade against the drug cartels in early 2007.

In the southwestern port of Acapulco, one of Mexico’s leading tourist centres, thousands of people dressed in white flocked to an extraordinary march along the seafront promenade Sunday Sept. 11, to express support for the movement for justice and against violence.

In contrast with other marches Sicilia has organised, media coverage has been remarkably low-key. The poet previously headed a walking march from Cuernavaca to Mexico City and a motorcade covering over 3,000 km to Ciudad Juárez in the north, on the border with the United States.

Media attention is currently centred on the campaigns for the nomination of candidates for the 2012 presidential elections, and on the opening of ordinary sessions in the lower house of Congress.

“Apparently they don’t care about the south,” a close associate of Sicilia’s told IPS.

However, the caravan has enabled family members of the victims of the violence generated by the “war on drugs” waged by the federal government, and of the structural violence that criminalises social protest, to come together.

“There has always been violence in Guerrero, caused by corruption and extreme poverty, and there has always been drug trafficking: all the heroin in the country is produced in this state,” Ricardo Espinosa, the uncle of Adriana Morlett, a student at the National Autonomous University of Mexico who disappeared Sept. 6, 2010, told IPS.

“But in recent years we have experienced disproportionate violence and cruelty of a kind we had never seen before,” he said.

Some 600 people are on the Peace Caravan, riding in 15 trucks and a dozen cars along the winding roads of the south and southeast.

At their nightly campsites, victims of the clash between government security forces and organised crime mingle with groups with a long history of social struggle.

Among them is Tita Radilla, the daughter of Rosendo Radilla who disappeared 30 years ago, and whose case resulted in the only condemnation of the Mexican state by the Inter-American Court of Human Rights for crimes against humanity.

Radilla complained that President Calderón has not complied with the verdict of the Court, and blamed him for the violence that has left more than 40,000 people dead and 10,000 disappeared, and has displaced 700,000 people from their homes since January 2007.

Macario García, leader of the Independent Movement for Triqui Unity and Struggle (MULTI), said: “This war of extermination is not only happening in San Juan Copala (a town under siege whose indigenous Triqui residents have been displaced from their land), but all over the country.”

“This caravan has made us feel stronger,” Nepomuceno Moreno from Sonora state told IPS. He is looking for his son, who has been missing since July 2010.

via Mexico: Peace Caravan “Has Made Us Feel Stronger”.

In Oaxaca, Mexico, Fresh, Locally Grown Food is Not a “Movement” – NYTimes.com

In Oaxaca, Mexico, Fresh, Locally Grown Food is Not a “Movement” – NYTimes.com.

Following in the footsteps of Jack Kerouac in Oaxaca, Mexico | The Periscope Post

Following in the footsteps of Jack Kerouac in Oaxaca, Mexico | The Periscope Post.

The mayor of Monterrey, where 52 people died in last month’s arson attack, is in President Felipe Calderon’s PAN party, which wants him to resign. Its chief rival, the PRI, has leaped into the fray.

Monterrey Mayor Fernando Larrazabal is greeted by supporters as he arrives at city hall this month. He is under pressure from the ruling National Action Party to resign his post. (Tomas Bravo / Reuters / September 7, 2011)

There’s still time to see the last few performances of Camino, which also happens to feature a beautiful shirt donated by us for a performers’ costume…

There will be a special performance in Spanish of Federico Garcia Lorca’s “Poet in New York”, on Sat. October 1st with the Pig Iron Theatre Company at the Kelly-Strayhorn Theater…

And stay tuned at Global Beats Pittsburgh for details of their next event, World Reggae Night…

Brasileiros (and all those who love them!), are cordially invited to Pittsburgh Brazilian Day…